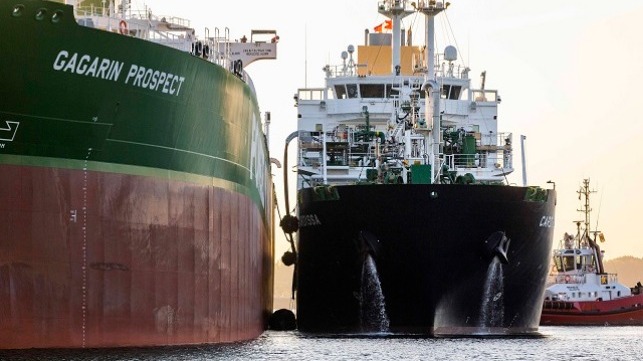 The ice class 1A tanker entered into a Shell multi-year time charter in July 2018. A sister ship, Samuel Prospect, is scheduled for delivery into Shell time charter next year. The vessels are part of a series of six Sovcomflot tankers currently under construction at Hyundai Heavy Industries and due for delivery between the third quarter of this year and the first quarter of 2019.

The two ice-class tankers will be on time charter to Shell for up to 10 years, with a minimum commitment of five years. The 114,000dwt tankers will operate on Shell’s global freight trading network. The ships’ 1A ice classification allows them to transit the Northern Sea Route and trade in harsh winter conditions.

Russian ports are also offering discounts on harbor fees which amount to a €9,000 saving on a €105,000 port call charge.

The fueling of the Gagarin Prospect with LNG is the first operation under the LNG fuel supply agreement between Shell and Sovcomflot signed in 2017. Cardissa, delivered in 2017, can hold around 6,500 cubic meters of LNG fuel. The vessel’s seagoing capability enables Shell to serve customers with LNG fuel in locations throughout Europe.

Shell will also supply LNG to the world’s first LNG-powered cruise ships in 2019 following an agreement with Carnival Corporation.